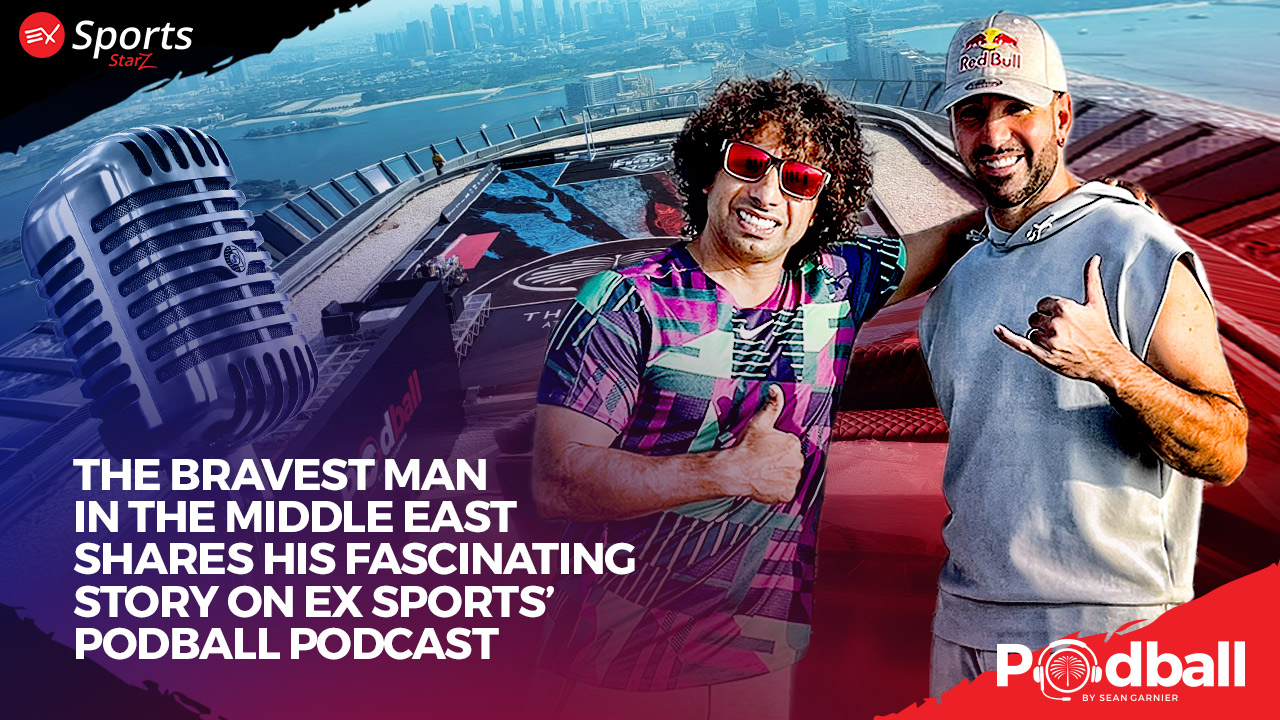 While taking part in the highest sport celebrity podcast in the world is impressive, it is the many other achievements in his extraordinary life that have earned Nasser Al Neyadi the title of “The Bravest Man in the Middle East”. Nasser joined series host and street football superstar Sean Garnier and co-presenter and MMA pioneer Tam Khan on the roof of the ‘View at the Palm’ overlooking Dubai’s iconic Palm Jumeirah to share his amazing story on the EX Sports’ Podball Podcast series.

Although Nasser includes the relatively sedate sport of football among his favourite pastimes, it is his love for skydiving, paragliding and base jumping that has earned him the nickname of “The Bravest Man in the Middle East”. An Emirati skydiving expert with well over 5,000 jumps to his name, Nasser is the president of the Emirates Aerosports Federation and the chairman of Skydive Dubai.

From its elevated location on the roof of the View at the Palm, Podball may be billed as the highest sport celebrity podcast in the world, but the birds eye view is not a new one to Nasser, who previously organised the first international parachuting championship in Dubai over the Palm Drop Zone.

Nasser is also no stranger to being on Dubai’s highest rooftops. In 2010, he completed a base jump from the Burj Khalifa and he later became the first skydiver to attempt and successfully land a jump on Burj Al Arab’s helipad.

As Nasser chatted with Podball co-hosts Sean and Tam, the trio discussed everything from Nasser’s crazy adventures to life in Dubai, sports, football and the FIFA World Cup. Nasser may have wowed everyone with his adrenaline-fuelled escapades, but it was Tam who impressed everybody with his deep knowledge of football.

This podcast belonged to Nasser, though. Showing that he still has his passion for adventure, he confirmed that he was heading down to Abu Dhabi straight after the podcast to join a number of skilled skydivers as they attempt to break four Guinness World Records:

Before he left, however, it was time for Nasser to take the Podball Trickshot Challenge. Every guest on the podcast is invited to play the trickshot game in the Urbanball demo mode. The guest with the highest score at the end of the series wins $10,000 USD to be donated to a charity of their choice. To add to the drama, Sean does his best to distract the guest while he is playing by asking him several quickfire questions. Despite his best efforts, Nasser’s score of 2,330 wasn’t enough to take top spot, with former German soccer international, Dennis Aogo still leading the challenge with 3,480 points.

Watch out for more exciting Podball episodes being released over the coming weeks.