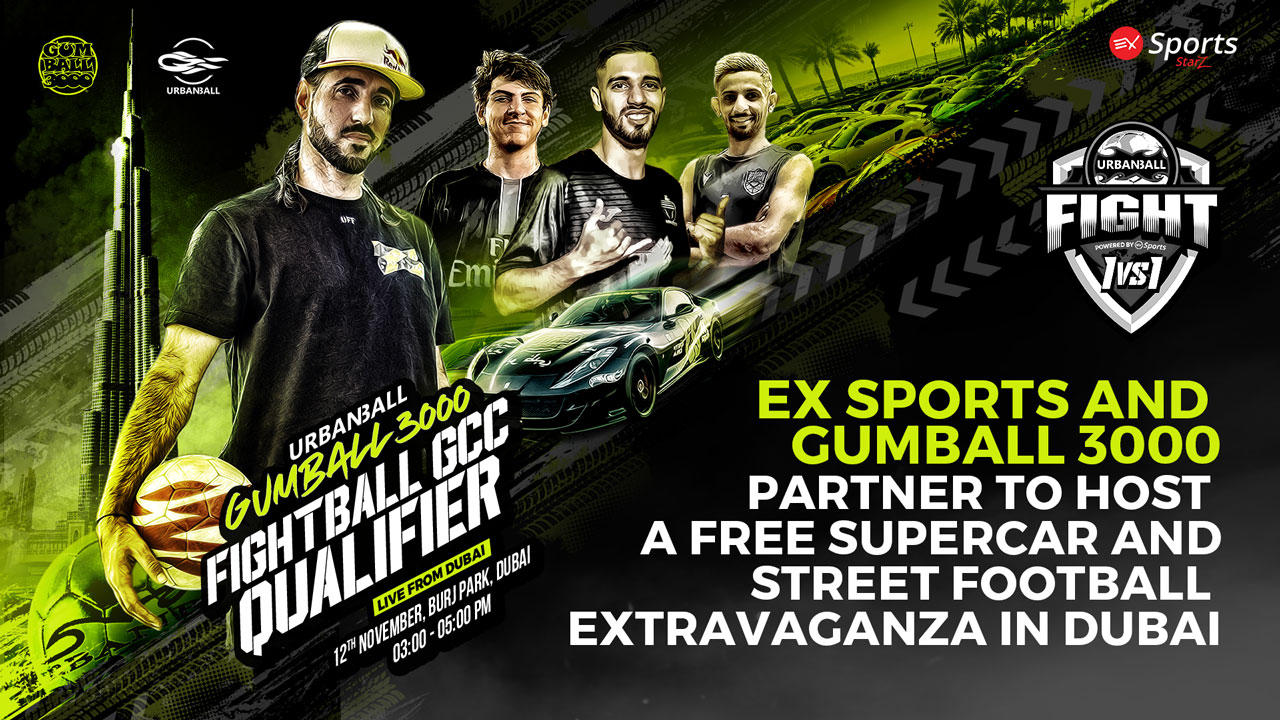 This November, Dubai’s Burj Park will host a groundbreaking extravaganza of high octane supercars and street football superstars when EX Sports subsidiary Urbanball teams up with Gumball 3000’s 23rd Annual Rally, Gumball 3000 ‘The Middle East’, for an unprecedented day of speed and skill. Scheduled to take place on the 12th of November this year, the fun filled event will host celebrities, athletes, influencers, musicians, and freestylers as well as several football legends and some of the world’s most exclusive cars.

Since it was established in 1999, Gumball 3000 has staged annual supercar rallies in Europe, North America, Asia, and Africa. Having quickly gained iconic status, Gumball 3000 has attracted superstar drivers in the past, such as Lewis Hamilton, Deadmau5, Xzibit, Usher, Tinie Tempah and many more. However, this year will be the first time that the 3,000-mile road rally will come to the Middle East when it sets off from Dubai on the 13th of November.

Gumball 3000 have already confirmed a star studded line up for The Middle East launch, including legendary rapper Eve, DJ Cuppy, Yung Filly, JWW and many more. To make The Middle East rally even more spectacular, Gumball 3000 have partnered with EX Sports to deliver a spectacular free festival of supercars and street football on the 12th November at the Emaar Burj Park.

Led by superstar Red Bull athlete and 2x freestyle football champion, Sean Garnier, Urbanball will hold the Fightball GCC Qualifier Finals during Gumball 3000 ‘The Middle East’s Official Launch on the 12th of November. Fightball is an intense and adrenaline-fueled 1-vs-1 street football sport that emphasizes skill, endurance, and technique, often referred to as the ‘UFC of football’.

EX Sports and Sean Garnier have been running a global Fightball tournament throughout the year with qualifiers held across different continents. For the Gulf region, in partnership with Red Bull GCC, qualifiers were held in Bahrain, Saudi Arabia, Qatar, and the UAE, unearthing some incredible talents. Winners from each of these countries will battle it out for regional supremacy on the 12th November at the Gumball 3000 ‘The Middle East’s Official Launch. The GCC finals will also feature exhibition matches, starring Sean Garnier and other freestyle maestros who will compete against current and former legends of the street football world.

Winners from the GCC Qualifier finals are also playing for the opportunity to become in-game characters in the Urbanball play-and-earn street football mobile game, a first of its kind in the world, releasing in December 2022. Athletes will have their NFTs created that become part of the Urbanball collection.