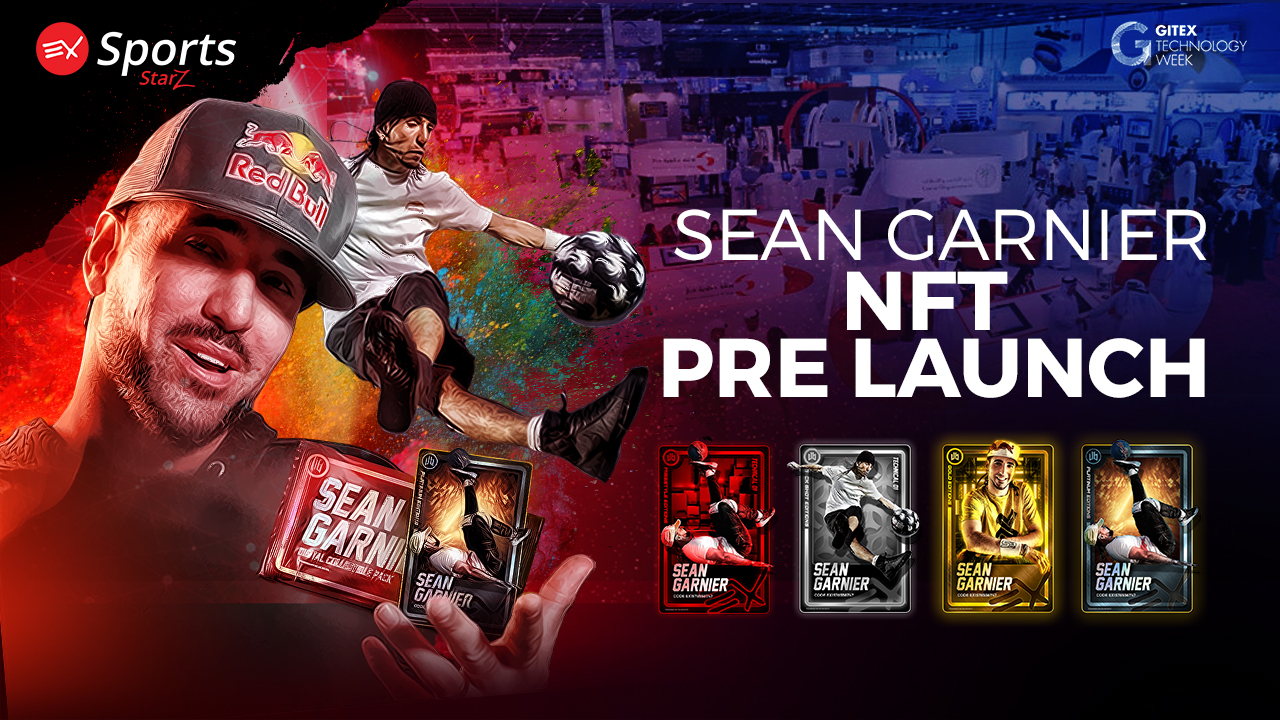 We’re thrilled to announce that EX Sports is collaborating with self-described underdog Séan Garnier to issue the world’s first freestyle football NFTs. Séan is widely known as the “world’s best urbanballer,” having developed a unique freestyle football technique that combines music and breakdance with elements of football and basketball. He began developing this style after suffering a series of injuries early on in his career; since then, his moves and routines have earned him numerous titles, sponsorships, and awards around the world.

Now, Séan is coming to EX Sports. Starting with a pre-launch on October 19th, fansFans will have the opportunity to purchase packs of original Séan Garnier digital collectibles on the platform, marking the world’s first freestyle football NFT issuance.

“I’ve chosen to work with EX Sports–over all the marketplaces–because I’m aligned with their vision and inspired to help build a marketplace for grassroots sports,” he said. “I’m a freestyler, so the passion and thought they’ve put behind a marketplace for ‘underdog’ athletes like me is amazing. That’s why I want to be part of the ecosystem.”

Fans can collect and trade NFTs featuring clips of Séan performing some of his signature moves by purchasing the new packs. ​​Séan chose to issue tokenized video clips rather than still images because he believes they have far more potential use cases. “NFTs should be more than just pictures,” he said. “They should have a real purpose.” Each of Séan’s collectibles will link to a full tutorial on how to master the skill featured in the corresponding video clip. “The ultimate purpose of my NFTs will be that the owner can use them in games to train their avatars, and so much more.”

Until now, sports collectibles have been dominated by “big money” sports with billions of dollars at their disposal. It’s easy to find physical sports cards for athletes in the NFL, NBA, EPL, and other major sports federations. But athletes in niche sports are mostly left out of the collectibles market. These sports -- games like volleyball, field hockey, badminton, and table tennis -- are beloved by billions of fans worldwide. Séan Garnier himself has more than 4.7 million followers on Instagram, 67K followers on Twitter, and 3.38 million subscribers on his YouTube channel. Nevertheless, there are more than 90 officially recognized Olympic Sports that still don’t offer sports cards.

“The strongest and most powerful use case for NFTs isn’t about lining the pockets of the wealthy. It’s about empowering the little guy—the ‘underdog,’” said Toli Makris, EX Sports’s founder and chief executive. “That’s why we think Séan’s story is hand-in-glove with our mission.”

That mission is to empower athletes outside the mainstream sports world. Our digital collectibles marketplace removes the barriers to entry that niche athletes face when trying to break into collectibles markets, empowering them to build new income streams, develop their personal brands, and connect with fans. Our goal is to expand access to financial opportunities previously only available to athletes in "big money" sports. We want to make sure that the "underdog" can win.

EX Sports provides athletes with the opportunity to create and sell digital collectibles on their own terms. Each year, athletes can create up to 1,000 limited-edition digital NFTs, a percentage of which are retained by the athlete to hold or sell anytime they choose. The remainder of the cards are sold in packs in exchange for EXS, the platform’s native digital asset. EX Sports is open to any athlete at any stage of their career–our extensive network of partner sports federations spans across sports of all kinds and skill levels.

Fans who buy digital collectibles on EX Sports can store them in digital albums, trade them with other fans, or sell them for EXS. And soon, fans won’t have to sell their digital collectibles in order to unlock their value. Our unique revenue-sharing model will allow NFT holders to earn EXS each time someone views a video of an athlete whose card they hold.

EX Sports is built around the belief that digital tokens can empower a new generation of athletes, artists, and creators. In collaborating with an underdog superstar like Séan Garnier, we’re putting this belief into action.